Many families visit us during the holidays, but it is often not easy to make plans for the whole family without spending too much money. Malaga and children? Yes ✅, it is a perfect city for leisure at any age as there are many things to do in Malaga.

Do you want to know what not to miss in Malaga with children?

Things to do in Malaga, Spain – Malaga with kids

Luckily for all who visit, the Costa del Sol has more than 300 days of good weather and a fairly warm temperature throughout the year. As in the rest of Spain the activities for children in Malaga will vary according to the time of the year. This offers endless possibilities about where to go with children in Malaga.

One of the most emblematic places, Malaga city gives to spend at least 2 or 3 days touring its most famous places. But if you have time you can discover some of its nearest towns.

As a recommendation, look for a hotel or accommodation as close as possible to the centre of the capital. The little ones will love to stroll through its wide pedestrian streets and enjoy the amount of services it offers. With them you can see the Cathedral Basilica of the Incarnation. Located in the Plaza del Obispo, one of the best known of the city. The cathedral is considered a jewel of Renaissance architecture and part of the Baroque in Spain.

You will surely reach Calle Larios, the most famous street in the city. No doubt you can not miss the walk along this street that is decorated especially at Christmas or during the Fair of Malaga. 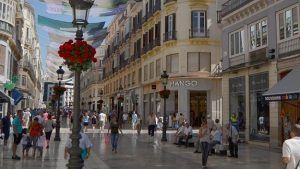 Although they are not the typical children’s activities in Malaga for children, if you want your children to know the more traditional part you have to visit El Mercado Central de Atarazanas. The municipal market located in an iron building of the nineteenth century, built on the remains of the old Arab shipyards, and fortunately for the city the original entrance arch is still preserved. It is a very lively space, full of fresh produce. It is open from 8 a.m. to 2 p.m. Monday to Saturday.

The centre of Malaga is undoubtedly a unique place, let yourself be surprised in the Plaza de la Merced, where acts and music festivals are usually held. This is the birthplace of Pablo Picasso.

Something not to be missed in your holidays in Malaga with children is the visit to the Roman Theatre, this was built by Emperor Augustus and has a breathtaking views that no doubt will please children.

Next to the Roman Theatre is the Gibralfaro Castle and the Alcazaba of Malaga, are some of the best preserved Hispanic-Muslim buildings in Spain. Surely the little ones will like to imagine battles between gentlemen in such a well-kept space.

Who said monuments were boring? You already have plans with children in Malaga!

One of the activities for children in Malaga that most of the time goes unnoticed, but that the little ones will love. With the philosophy “The airplanes are not only seen, they touch each other” this space in Malaga allows access to the cabins and touch absolutely everything you can imagine. It has the first plane that brought tourists to the city, the Convair 440 or a copy of a private plane from 1937, Beechcraft 18.

It also has an engine room, “propulsion in all its forms” and an interactive room where you will learn about the history of the airplanes in the city.

Another of the characteristics of this place is its location, the Aeronautical Museum of Malaga is located in the original passenger terminal of the airport, next to the General Aviation terminal that became obsolete after the expansion of the airport. The best? The visit is free, it is only closed on Sundays and Mondays.

It is one of the places least known by tourists, but undoubtedly one of the most surprising. No doubt Malaga is for children! 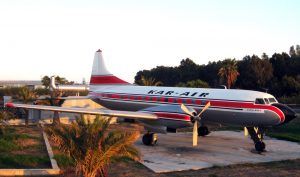 How long are you gonna be in town? If you are going to spend a weekend with children in Malaga you might want to visit some of these parks, they are specially designed for the entertainment of the whole family and can be an alternative and free plan.

We’re sure he’d also like some time to run and play outdoors. Malaga has huge playgrounds to give free rein to the fun of your children. Below we describe some of the most striking.

Full of exotic flora, it is one of the most important public parks. It is located in the center of the city and was built in the late nineteenth century. Under the park are the remains of the houses that were attached to the Alcazaba. Since 2017 Parque La Alameda has been declared an Asset of Cultural Interest.

Within this space, in addition to the flora, you can also see numerous fountains and sculptures that pay tribute to personalities of the city. The Malaga Park, also known like this, has an auditorium inside that hosts several events during the year.  Without a doubt, a place for holidays in Malaga with kids. 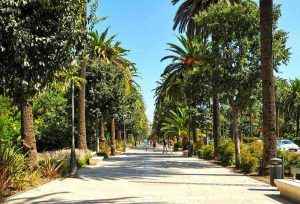 Inspired by the famous work of Louis Stevenson. This children’s playground was inaugurated in 2013 and located in the district of Puerto de la Torre, specifically in Victor Hugo Square. Born to encourage traditional play and imagination, it is the perfect place to disconnect with your children.

It has 800 square meters and multi-game green areas with various animal docks and the mast of a boat with climbing ropes. It is one of the most popular parks for kids in Malaga because of its theme. 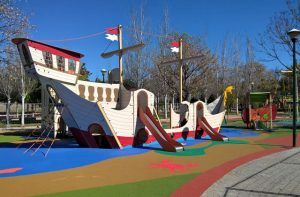 Full of colour, one of Malaga’s most original playgrounds. Located in the area of Teatinos, it has more than 10,000 m2 and is inspired by the Seventh Art.

The areas in this park are distributed between books and films. The whole environment is dedicated to the game simulating the old rolls where the films were recorded.

Or seniors the area has a zip line to jump on without stopping. It also has a pimpón table and even a small theatre for children to perform plays. This children’s playground is designed to the millimetre for fun. So it has an area dedicated to Orson Wells, another to Charles Dickens and you can even prepare a tea like Alice in Wonderland. 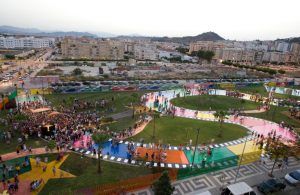 Inaugurated in 1992, created as an ideal space to rest and stroll in one of the most populated areas of the city. It stands out and is known among the people of Malaga for its immense lake. Surely children will love it because it has animals such as swans, ducks, agapornis, emus, Wallabies of Bennet or turtles.

On the other hand, Parque Oeste has 45 statues distributed by the park that give it the character of an open-air museum.

There are also indoor football fields, basketball courts and a dog park. Don’t forget the picnic tables and benches area. Can you imagine your Malaga family holiday? 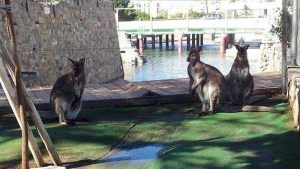 We like his name already. A space with more than 15,000 m2 designed for almost all types of activities. It is characterized for being an original and colorful park, full of vegetation like palms, ficus or cypresses. Inside it has a large pond and modern sculptures.

In addition, it houses a multitude of platforms for the youngest, but also for the oldest. It has a gymnasium for the elderly, a blue track for running and a green track for bikes. 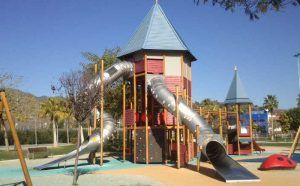 Did you like the parks? Malaga is also for children. We still offer you another alternative.

Since the creation of Dock One in the city, many families pass through it every weekend. The open shopping centre usually organises activities for the little ones, thus enjoying the Port of Malaga with children.

5. What to do in Malaga with children when it rains?

We only lacked alternatives in the rain! Travelling to Malaga with children when it rains is simple, as you have seen the offer is wide. Also, if it rains (we have more than 300 sunny days a year) you will be able to visit many museums, and you will find all the establishments open.

As you have seen, there are many places in Malaga that are designed for the enjoyment of the youngest during the days of rest or holidays. What are you going to choose to visit Malaga with kids? If on the other hand you prefer to have a quiet drink on a terrace we have the perfect list of terraces in Malaga.

There are many who travel all year round to the Costa del Sol, now you can rent your car in Malaga and move around all corners of the city.