Officially begins the festivities in Ronda 💃🕺. A special event is the Ronda Fair, as it is not celebrated in honour of any saint or virgin but of the bullfighter Pedro Romero.

This year the Ronda Fair has undergone some changes, especially with respect to the traditional bullfights since the businessman, Francisco Rivera, decided that the bullfights in the Real Maestranza de Caballería would take place this past weekend.

Ronda has more than 33,000 inhabitants. A city with a special charm, visited every year by thousands of tourists and settled on a plateau cut, which gives the city a unique panoramic view in the province. Undoubtedly, there are many places to visit in Ronda with an unparalleled attraction. The passage of the Guadalevín river through the city in the Tajo de Ronda is one of the most attractive places that the locality offers.

The Ronda Fair in honour of Pedro Romero is one of the most important in the whole province of Malaga. Originally it was held in the San Francisco neighbourhood, but in 1881 it was moved to the Mercadillo neighbourhood, where the Ronda May Fair was already taking place.

In 1954, the Ronda September Fair became the Pedro Romero Fair, in homage to the Ronda bullfighter.

The streets of the municipality are prepared for the occasion and September is a perfect month. To inaugurate the fair, there is the Cabalgata de la Alegría, a parade of floats that runs through the main streets of the city to the delight of its visitors.

At the end of the day there is the traditional lighting of the Real de Feria, Ángel Harillo. This is the official act with which the Feria de Pedro Romero de Ronda begins.

When is de Ronda Fair?

This year 2019 the festivities in Ronda are celebrated from the 3rd of September until the 8th. Without a doubt a perfect date to be able to enjoy the good temperatures of September. There are many tourists who come to the town these days to live a traditional Andalusian fair that also has a Contest of Enganches whose date will be September 7.

Preliminary Acts of the Ronda Festivities

It is already traditional that the days before the beginning of the fair there are some acts like the pregón, the Festival de Cante Grande de Ronda, the International Folkloric Gala or the presentation of the Damas Goyescas. 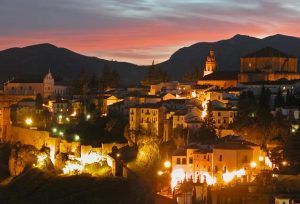 There are many who wait every year for this appointment in Ronda. A very traditional and famous bullfight that is celebrated in the bullring of Ronda. Every year it is common to see famous people from all over Spain come to the meeting on Saturday afternoon. This year 2019, as we already commented before some changes have taken place, said meeting last Saturday, something atypical of the fair of Ronda.

Like all good fairs, Ronda hosts numerous concerts during the first week of September. This year, artists such as Dvicio or Siempre Así (Always Like this, these performances will take place in the Real) will stand out.

Cover on the Ronda Fair

In addition to the fair, Ronda has its fair in the centre. This year the cover of the fair is the work of the artist and illustrator Raúl Guerra. The work of Ronda was a favorite in the popular vote launched by the Delegation of Festivals of Ronda.

The title of the cover is “Entre rosales”, a work inspired by Goya’s engravings, influences from the world of illustration, manga and pop surrealism, according to Raúl Guerra. Every year, this cover is one of the main attractions of these festivities. 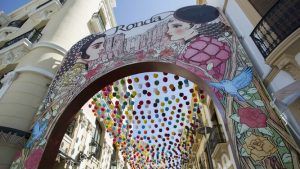 As you have seen, a week full of spectacle in the city. A unique opportunity to experience a true Andalusian fair with festivities for all kinds of audiences. Are you thinking of visiting Ronda? You can rent your car and enjoy a few charming days in the province of Malaga.

If instead you are in the capital, you can make a multitude of plans such as having a drink on the terraces of Malaga or discovering the city with children.

Rate this article about Ronda Fair