Do you want to know everything about Feria de Malaga 2019? ✅ Keep reading and discover everything you need to spend unique days at the Feria without missing anything.

One of the most significant novelties of the Feria this year is its duration, which is extended compared to previous years and it will take place from August 15 to August 24. Without a doubt, the busiest days in Malaga occur in August during the celebrations of its most important festival, the Feria de Málaga.

Its origin dates back to the capture of the city by the Catholic Monarchs in 1487, although it is years after when the celebration takes on the importance and character that we know today.

Every year, the city council prepares a different program that includes concerts and other activities to make Feria de Malaga more fun and attractive. Next, we will review the program of the Feria de Malaga 2019. 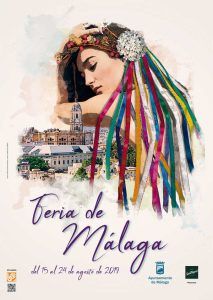 Feria de Malaga has 2 different locations and, in both of them, you can breathe the most typical atmosphere of the Malaga culture.

This is the original location of the Malaga fair at the beginning and it is common to enjoy it during the day.

From about 11 in the morning, the streets are full of people and the whole centre of Malaga becomes an outdoor party where you can dance, drink and sing until night.

The door of the downtown fair represents the “entrance” to the fair and, every few years, changes style. 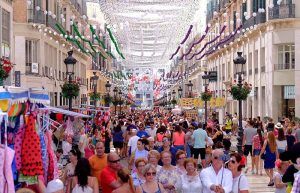 This location has fewer years of history but this is where the purest spirit of the fair is breathed. The traditional “casetas” and horse cars, as well as an outdoor amusement park for the little ones with endless attractions and fun activities.

Traditionally this fair is more popular at night but, in recent years, it is also very busy during the day. 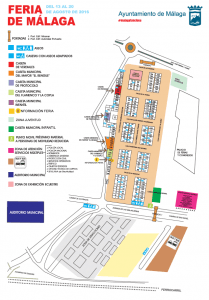 It is easy to reach both locations of the Malaga Fair, and they can be accessed from anywhere in the city through a special public bus network and commuter train.

How to get to Malaga Downtown Fair

If you are within the city, you can search through the Google Maps application for the best possible route, in addition to checking the waiting time in the APP of the local transport network or on its website. In general, the best stops to access Feria de Malaga in the centre are Alameda Principal, Plaza de La Marina, Paseo del Parque and Plaza de la Merced, although there are more options available.

If, on the other hand, you are enjoying your vacation outside Malaga and wish to spend a few days at the fair, you can access through the Commuter train, getting off at the Málaga Centro-Alameda stop or through bus the bus network from other towns, stopping at Muelle Heredia. Another good option is to use a rental car in Malaga and leave your vehicle in one of the many parking in the centre of Malaga such as the Parking de la Merced, the Parking de Plaza de la Marina and the Parking de Camas.

How to get to Malaga Suburbs Fair

The special bus network of the Feria covers the whole city and take you to the Malaga Fair from approximately 8 pm in the afternoon until 6 am in the morning.

If you are outside the city, you can also use the special bus network that covers the route from the most important towns of the Province of Malaga to the Suburbs Fair. On the other hand, the commuter train also has a stop 10 minutes from the Suburbs Fair so, if you are staying in places like Torremolinos, Benalmadena or Fuengirola, you can get there in about 20 minutes.

Although the official program of Feria de Malaga 2019 has not been published yet by official organizations, we have a lot of information about other aspects of Feria this year.

On the night of August 14 to 15 the traditional fireworks that announce the beginning of Feria de Malaga. Fireworks are launched throughout the Costa del Sol and can be seen from several kilometres far and mark the beginning of the celebrations.

In Malaga, the fireworks take place on the Malagueta beach and the tradition is to go outside and see them from the beach or from a nearby terrace. A magical night for the people of Malaga and a very special event for everyone who is visiting the city. 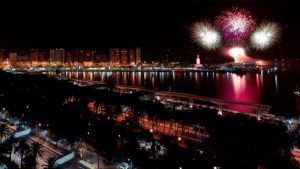 The musical offer of the Malaga fair never disappoint and many of the best artists from the national and international scene usually attend. In addition, the entrance to the concerts is free, which makes it even more interesting.

Unfortunately, we are still waiting to have more information about the program since the official institutions didn’t publish it yet. Later on, we will update this information.

What you cannot miss from Feria de Malaga 2019

Discover some of the most typical traditions of Feria de Malaga with Marbesol:

Cartojal is the most typical drink of the Malaga fair and it is mainly consumed during the days the Feria takes place. If you visit Feria de Malaga, do not forget to try it! 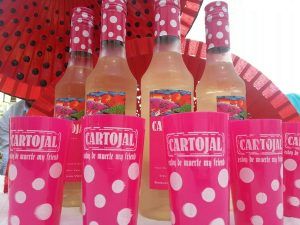 Among the most common accessories during these days, flamenco dresses stand out, but also the use of a flower on the hair becomes popular between women.

While most of the local people do not make use of the typical costumes, many people add some typical Andalusian accessories and use bright summer colours such as white, yellow or red.

A classic of the Malaga Fair is the delicious mojito of the Caseta El Rincon Cubano.

As you have seen a fair full of performances and thousands of people. The neighbouring villages also have their own. One of the most outstanding fairs in the province of Malaga is the Fuengirola fair. Are you coming to Malaga and need a car to move around the city? Rent your car now and start enjoying yourself.