What to do in Nerja

Marbesol Malaga Guide. ⭐ Discover what to do in Nerja. ✅ Completely Free! ✅.

Nerja is the easternmost municipality in the province of Malaga. Located on the Mediterranean coast about 52 kms from the capital, bordered to the North and West by the municipalities of Competa and Frigiliana, on the East by the town of Almuñecar, Granada. It has a population of about 22,000 inhabitants, of whom a 30% are foreign residents. 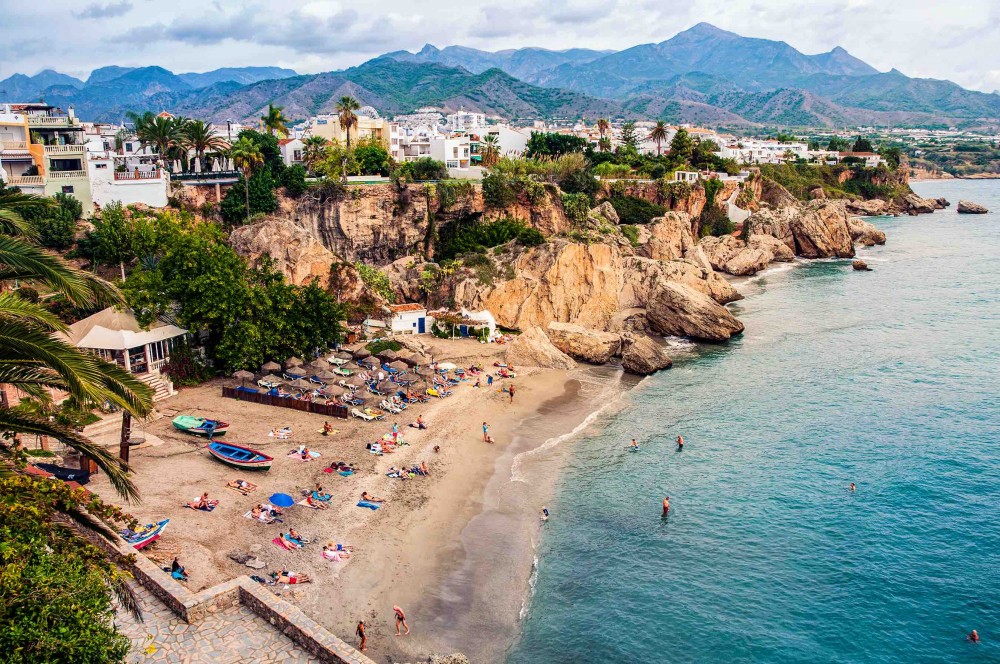 According to recent discoveries in the Cueva de Nerja, the first settlers who settled the area date from the Paleolithic and later the Bronze Age. This is demonstrated by the significant human remains belonging to the Cro-Magnon. There are no more traces found until the Roman era, with the discovery of remains of a smelter, an aqueduct in ruins, some vases and coins, all in the area of Nerja. With the advent of the Muslims in 711, began the conquest of the peninsula. Found in the writings of the period is the formation of a new town in the North of Malaga wich the Muslims christened with the name "Naricha" or "Narija" (means "abundant spring"), had its own fortress, which, you can still see some remains. With the conquest of Malaga by the Christians in 1487, Nerja continued being inhabited by Arabs and Jews, until they were expelled, leaving the city very deserted in the early XVI century.

Since Nerja was in an area that suffered continual attacks by pirates and Arab invasions, people started arriving from other regions of the peninsula, to repopulate and defend their coasts, which were built to guard towers and armed themselves with the existing guns, like the Tower of the Guards (Balcony of Europe today). In 1515 Nerja gets its Home Rule Charter and stops relying on Velez, beginning in these years to grow the city, being the main activities the war and agriculture. With the Moorish rebellion of the Alpujarras and the victory two years later by the Christians (1567), we can say that it started the development and prosperity for the people.

In 1655 the city had a street circuit with its first streets, Carmen, Tajillo, Sea Gate and some years later ended with the first phase of the Church of the Savior. As far as agriculture is concerned, with the sweet-cane it was to build the first sugar factory in Spain, late XVII century. Until the early nineteenth century, the city experienced a period of growth, development of new industries, improving cropping systems, mining and road construction to join it with Malaga and Almeria.

Two important events were those that led to new population reduction and a new stage of decline. The first was the Independence War against Napoleon's armies, which led to the destruction of the most emblematic buildings of the city, the Castle of Nerja and La Torrecilla etc. On the other hand, the 1884 earthquake, which caused extensive damage in material and were added to this drought, pests that destroy crops, cholera, typhus, and finally people migrating to South America. After 1950 is when we can notice some progress, boeing the symbol of this improvement the discovery of the Cave of Nerja, followed by tourism development, bringing progress and prosperity to Nerja. 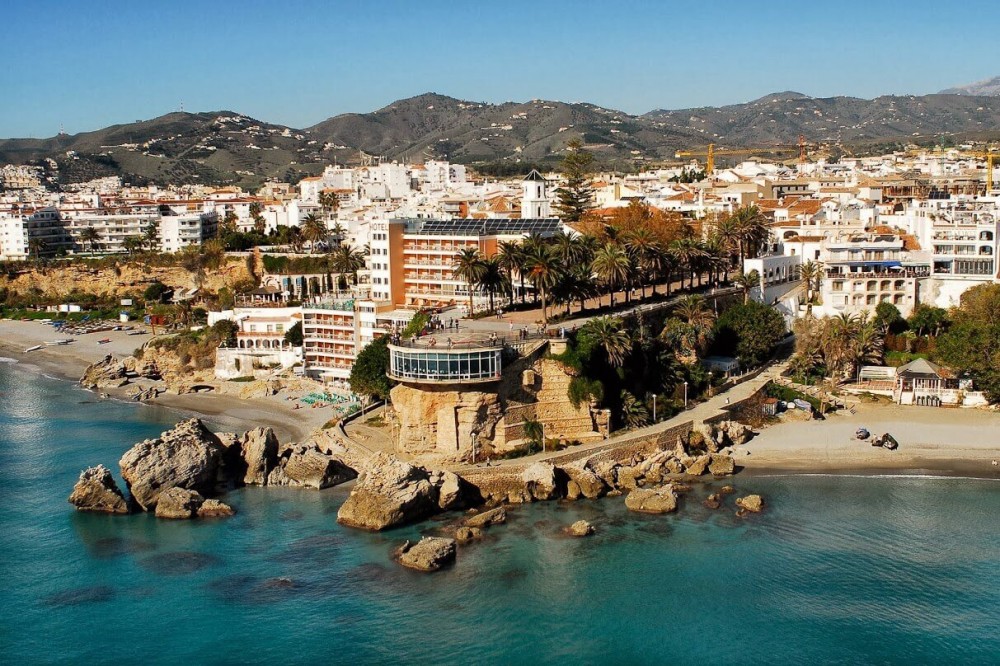 Places to visit in Nerja

It is about 800mts from the coast on a small elevation in the Sierra de Almijara, about 5km from the city center. Having a dimension hitherto discovered of nearly 5 km of galleries in a horizontal plane, the area open to the public has with maximum length of about 700mts. and represents the third of the area explored so far. It was discovered in January 1959 by a group of local youths who named it the Mine Cave. The most attractive thing of the cave is in the Hall of Cataclysm and it is the huge column of 45mts high and 18mts in diameter, is considered the world's largest. The many different columns, stalactites, stalagmites, cave paintings, archaeological sites and remains found, cover a period between 22,000 and 1600 years b. C, and turn the cave into a primary geological element. It is considered a Historic-Artistic Monument and also as a World known Cultural Interest. The cave is also famous for the celebration of the International Festival of Music and Dance, which is held annually during the month of July.

The Balcony of Europe

This is an Arab fortress of the IX century, and next to it it was ordered to build in the XVII century the Tower, known since then as Tower Guards. In 1885 on his visit to the town, to check the damage caused by a major earthquake, the king Alfonso XII was captivated by the beautiful views as seen from the viewpoint, then he proposed that the name was changed to the Balcony of Europe. Currently the beautiful coastal view stands out and enters between the beaches of Salón and Calahonda. It is an obligatory place to visit among the variety of places offered by the city.

Church of the Saviour

The current structure dates from 1697, was expanded and renovated during the XVII century. The church has three naves, the central domed wooden braces in pairs, in Mudejar style and the square tower built in 1724 and subsequently reformed. The interior is characterized by the decoration of paintings of XVII century, the mural of the Annunciation by Francisco Hernandez and the Christ of Bronze, by Aurelio Teno.

Inside you can see the statue of Our Lady of Sorrows, patron saint of Nerja. The Hermitage is a small temple of a nave, built in XVII century in Baroque style, the interior is decorated with frescoes of XVII century, belonging to the Granada school. 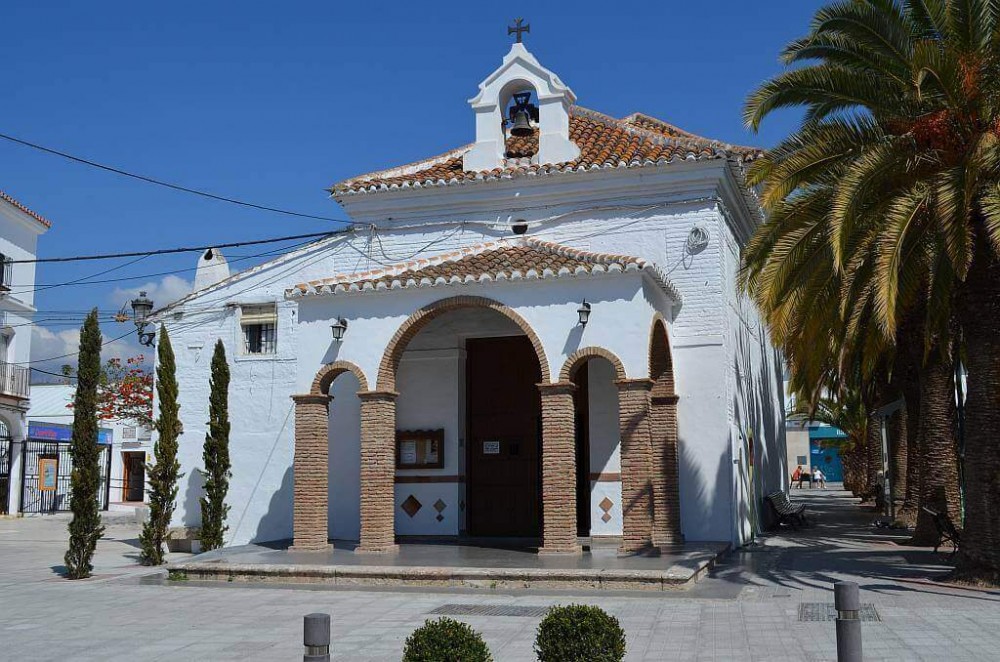 It is located in Maro, in a square next to a veranda overlooking the sea. The church was built in the XVII century, and it was then reformed, has one nave with a wooden framework, its facade is simple, with a large ceramic altar with the image of the Virgin and draws attention to the main gate is narrow and tall, pointed.

It is a small church built in the XVII century, it is baroque Moorish. The main altar in the form of vault is painted with images of the apostles. The church is located in a North Square of Old Town.

It is located near the N340, in the Barranco de la Coladilla, was built in the XIX century to bring water to the mills of the sugar factory, it is in perfect condition and is still used for local irrigation. It has four floors with 38 brick arches overlapping arches, the facade is decorated with horseshoe arches Mudejar style. There are temples on the top floor and central with an inscripción that says "Pure and Clean Conception".

Also known as Cerro Gordo, extends along the coast about 12kms to the North of Nerja to the province of Granada, is made up of magnificent cliffs and coves, forming an impressive landscape. It is a very rich area in flora and fauna. 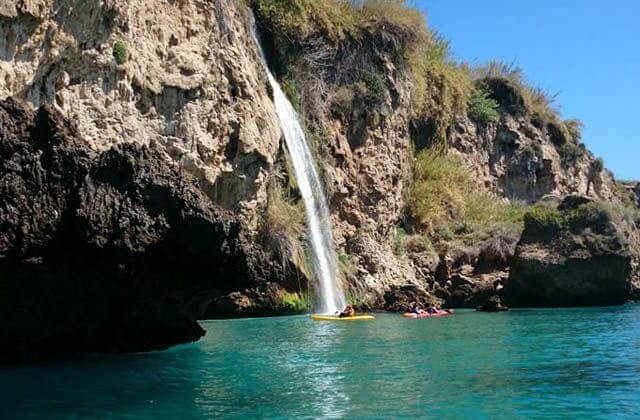 The town of Nerja has over a dozen of the most varied beaches, there are populated and urban, isolated as the Cliffs of Maro, or small creeks in the area of Natural Park. The coast has all the attractions for diving.

It has a length of about 800mts, dark sand, boardwalk and has a wide range of services, it is a family-friendly beach.

It has a length of about 300 meters, dark sand, with promenade and has all the services, it is a popular beach.

It has a length of about 140mts, dark sand, with promenade, located under the balcony of Europe.

It has about 1.700mts long, dark sand and surf environment, it is a little bit isolated, with some services and their occupation is average.

It is about 200m long, with dark sand, it is a very popular small urban creek, it has a range of services and it is only accessible by foot.

It is about 200m long, dark sand and moderate waves, is among the Playazo and Torrecilla, its occupancy rate is high.

It is 120m long, dark sand, with few facilities and their occupancy is high.

400mts. long, dark sand, a little bit isolated and beautiful by the surrounding of a natural environment.

It also has small creeks in the urban environment, such as: The Caletilla, El Chorrillo, Carabeillo. You have other coves and beaches in the Natural Park, which are usually less frequented and with a lack of services, such as: Cañuelo Creek, Pine Creek and the beach of Las Alberquillas which is a nudist beach. 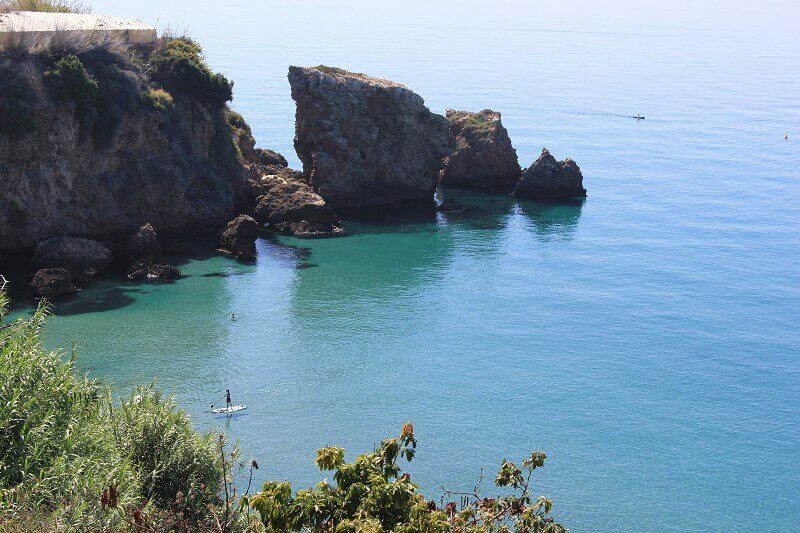 It is one of the biggest events on the Costa del Sol. In this festival the most important lyrics and ballet artists of the world act, including concerts by orchestras. This festival has been held in the concert hall of the Cueva de Nerja since 1960, during the months of July and August.

Held on 16th and 17th of January in honor of the patron saint of the village of Maro, San Anton. These are some traditional festivals, which have been celebrated since the XVII century.

This event has been taking place since 1878 on May 3rd. It is a celebration deeply rooted in the towns of Nerja, Maro and Frigiliana. On that day are exposed altars decorated with flowers and shawls, offering tastings of typical products such as the medlar, the cod cakes, sweet potatoes and the most important one which is "the arropía" made of honey cane heated and kneaded.

It is held from 8th to the 12th of October in honor of local patterns, the Virgin of Sorrows and St. Michael the Archangel. During these days there are different activities, the procession of the Virgin to the Church of the Savior, the Flamenco Festival, festivals, parade of floats, beauty contests as well as other cultural and sports activities. 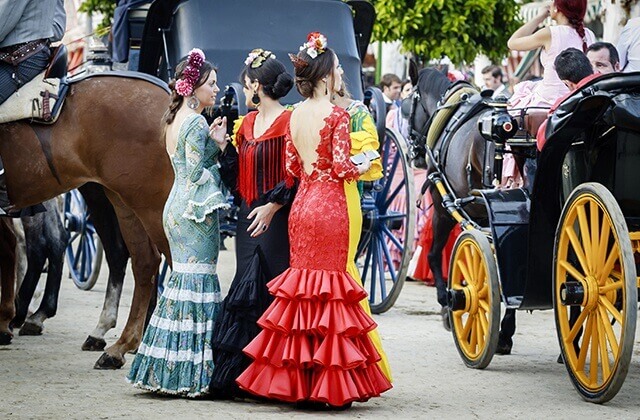 Nerja has a varied and attractive cuisine, their typical products are fish: anchovies, squid, salmonetillos, toes, soles etc. .. and tropical fruits like mango, custard apple and avocado among others, which they made dishes such as pepper fish and clams, salads, avocados, cod tortillas with honey sugar, fried squash, garlic white grapes and marinated anchovies. 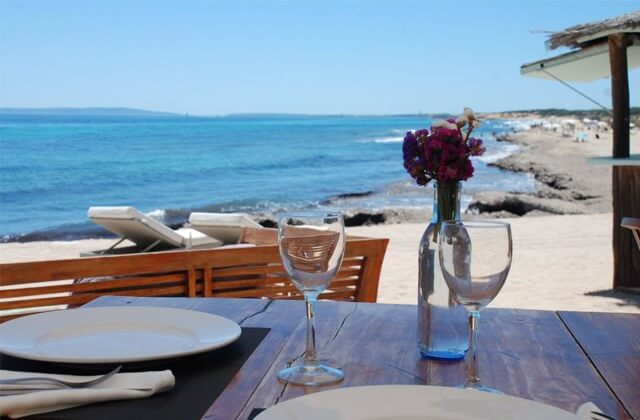 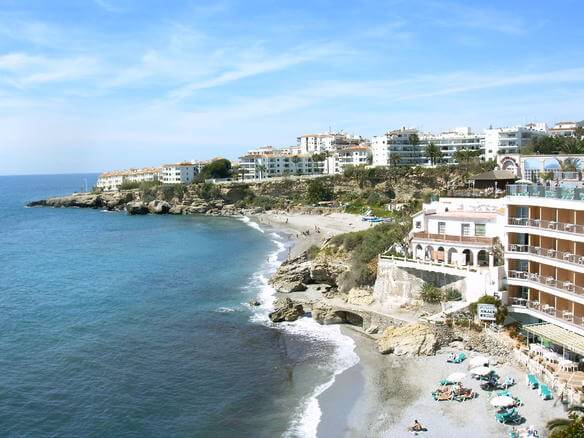 Nerja's magnificent collection of beaches, historical monuments, festivals, cultural events, and archaeological sites draw visitors in droves year after year. For this reason, many entrepreneurial individuals have decided to put up shop here.

Today, Nerja is packed with numerous commercial establishments, both big and small. Even narrow streets like the parallel alleys of Calle de la Pintada and Calle del Almirante Ferrandiz are dotted with tiny shops selling clothes, wine, trinkets, and posters. What you'll find below are some of the most frequented shops in town.

Book worms can find cheap used books at the Nerja Book Centre, along Calle Granada. You can contact them at 952520908.

If all this does not satisfy your tastes, head out west on a 30-minute drive to the busy intersection connecting Torre del Mar and Velez-Malaga. There you'll find a big shopping center called El Ingenio. This large commercial establishment has its own shops, restaurants, banks, entertainment center, and movie houses. El Ingenio can be reached via the Autovia del Mediterraneo or A-7. 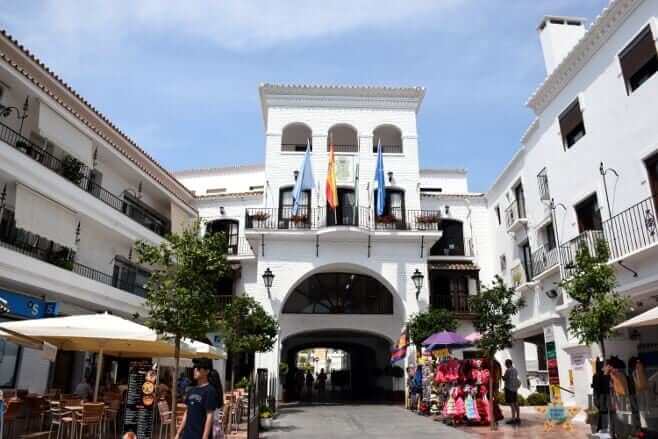 The subtropical climate, the topography of Nerja and its location in a small bay on the Mediterranean coast, makes it considered one of the best climates in Europe. The average temperatures are pleasant throughout the year, with an annual average of 19.5 ºC and 300 days of sunshine a year. The months of November and January are usually the wettest and June, July and August the driest. 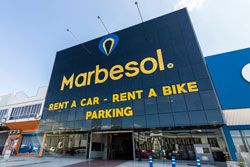