March is the month that begins spring, where temperatures rise and the Costa del Sol becomes the perfect place to enjoy outdoor activities. Today, from Marbesol, we want to tell you which are the best activities in Malaga in March.

THE MONTH OF THE MALAGA FILM FESTIVAL

This festival was born in 1998 and since then it has managed to position itself as a national reference. It aims to encourage the dissemination and promotion of Spanish cinema.

This year is the twenty-third edition. The Malaga Festival contributes to the development of Spanish cinema by presenting its best Documentaries, Feature Films, etc. during these days.

The best Spanish actors and actresses come together during these days in the capital. You can consult all the information about the Malaga Festival here.

SPORTS IN MALAGA IN MARCH

Soccer lover? The Spanish Indoor Football Cup is the jewel in the crown of national indoor football. It will be held at the José María Martín Carpena Sports Palace.

Last year this great event took place in the city of Valencia. It brings together the eight best teams in the league at the end of the first round. This great event strengthens, even more, the city, which this year is the European Capital of Sport 2020.

You can buy your ticket for The Spanish Indoor Footbal Cup here.

City of Malaga Half Marathon

The Caixabank Half Marathon City of Malaga celebrates this year 2020, its thirtieth anniversary.

The objective of this half marathon is to put 8,000 runners in the streets of the capital. This event is one of the most awaited ones of the year for all the athletics of Malaga, but also the Andalusian.

You can consult all the details of this sporting event on its website.

EVENTS IN MALAGA IN MARCH

The IV International Manga Festival is an international event dedicated to TV series, manga, comics, animation, etc. A meeting point for creators, artists, fans and the general public. This year 2020, important actors of the stature of series such as Juego de Tronos, Harry Potter or the Paper House will be present. Are you going to miss it?

You can buy the ticket and get more information on their website.

POPULAR FESTIVALS IN MALAGA IN MARCH

Day of the tagarnina 2020 in Villanueva del Rosario

A popular festival held in the Malaga municipality of Villanueva del Rosario, located in the Sierra Norte of Malaga. A day full of activities to enjoy nature.

Do you know what the tagarnina is?

They are known as cardillos or cardillos de olla or de oro. It is a wild vegetable very consumed in this area of Andalusia. It is used to prepare typical dishes such as those consumed in the municipality of Villanueva del Rosario.

In addition to the tasting of this stew, there is a hiking route planned and some performances by the rhythmic gymnastics schools of Villanueva del Rosario and Loja. 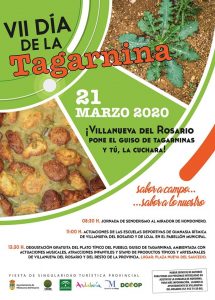 OTHER ACTIVITIES OF INTEREST IN MALAGA IN MARCH

The municipality of Rincón de la Victoria is located only 10 kilometers from Málaga and here you will find one of the three caves of marine origin known in the world, being the only one of its kind in Europe.

Its stories and legends date back to the Paleolithic era. Nowadays, the visit starts with an exhibition of archaeological remains. Several rooms can be contemplated and we have already told you that it hosts concerts. Would you like to enjoy a musical concert in a cave? Here it is possible. Find out about their opening hours here.

Surely you already know one of the most famous hiking routes in Andalusia, but also in Spain. The Caminito del Rey is located in the province of Malaga and receives thousands of visitors every year. A unique environment with hanging bridges where you can enjoy nature and discover the mountains.

Do you already know how to get there? Rent a car in Malaga airport and the adventure begins. You can check in our post how to get to Caminito del Rey.

As you have seen there are many activities available during March, find out now what to see in Malaga and province and do not miss the best places on the Costa del Sol.