The highest villages in Malaga that you should visit

Do you want to know which are the highest villages in Malaga? ✅ Do you want to discover the history behind them? ✅ We show you the Top 5 villages of Malaga that you must visit.

The villages of Malaga are famous for their white houses, their narrow streets and their gastronomy. Malaga offers a great variety of villages, both coastal and mountainous that are worth visiting. In this post, we want to focus on the second group and talk about the 5 highest mountainous villages in Malaga, ranked from the highest to the lowest in altitude. 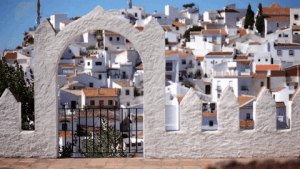 The 5 highest villages in Malaga

These are the 5 highest villages in Malaga that you can not miss:

The highest village in Malaga: Alfarnate

Alfarnate is the highest village in Malaga, at 886 meters above sea level. However, the village streets are not too steep, as it is situated on a large plain area surrounded by the mountains of “Sierra de Camarolos”, “Sierra del Jobo”, “Puerto de los Alazores”, “Sierra de Alhama” and “Sierra de Enmedio”.

Alfarnate is also one of the most beautiful Moorish towns in the province of Malaga. Its name comes from the Arabic word “Al-Farnat”, which means “flour mill”, thanks to the fact that in the 10th century, Alfarnate was a popular area for its flour production.

From Alfarnate’s gastronomy, we can highlight traditional dishes such as “migas”, “morrete” (scramble potatoes and mushrooms with sauce), “cachorreñas soup”, pot and porridge. On the other hand, the most popular sweet dishes in Alfarnate are: “rosco carrero”, “roscos de vino”, “palillos” and “mantecados”.

If you visit the highest village in Malaga we recommend you to stop at “Venta de Alfarnate” to enjoy some delicious “huevos a lo bestia” or “asado de cochinillo lechal”; have a coffee in Pub Morgan, the busiest drinks bar in the village and take advantage of the opportunity to buy one of the best olive oils in Malaga: “el Aceite de Oliva Virgen de Monsalud”. 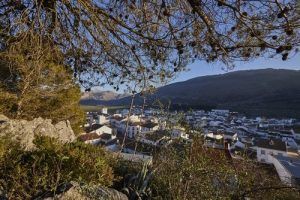 The neighbouring town of the highest village in Malaga: Alfarnatejo

Alfarnatejo is the second highest village in Malaga, located at 858 meters above sea level. It is known for being a neighbouring town of Alfarnate and it is surrounded by “El Chamizo”, “El Gallo” y “El Vilo”, so the views from this municipality are spectacular.

During the Muslim domination, the peak of “Alto Fraile” was used as an observation point to control the passage of enemies. There used to be a fortress, known as “Castillo de Sabar” and in its surroundings, a farmhouse was built. The history says that the farm could be the origin of Alfarnatejo.

Like Alfarnate, the typical dishes of this town are: “morrete”, “migas” and “cachorreñas soup”. In addition to the “choto al ajillo”, the “roscos de San Marcos” and the salad of mint and garlic.

We recommend visiting the ruins of the Arab castle and the church of “Santo Cristo de Cabrilla”, located in the highest area of the town, and end the visit with a “cachorreñas soup”. 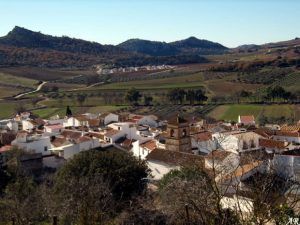 The highest city in the Province of Malaga: Ronda

Located at 740 meters above sea level, Ronda is one of the highest and most beautiful points in Malaga. After Antequera, Ronda is the most populated municipality in the inside lands of the province. It locates on a deep gorge by the Guadalevin River where the architecture and views are unique.

The gastronomy of Ronda is based on simple dishes such as tomato soups, and “potaje de garbanzos o lentejas”. In addition: “el chivo asado al estilo serrano”, “chorizo on alcohol sauce” and “beef with potatoes”.

One of the 5 highest villages in Malaga: Comares

Comares is one of the prettiest white villages in Costa del Sol and it is also one of the highest villages in Malaga. The centre of the town is located in a slightly steep area at 703 meters above sea level, an area full of ravines and farmhouses.

Comares was founded by the Phoenician Greeks who arrived in Malaga in the 7th century B.C and a century later it became the fortress of the Muslims, hence its architecture, name and current location.

About its gastronomy, we recommend you to try “el plato de los montes”, “el gazpachuelo” and “sopa de puchero”. Another of its main attractions is “Sweet wine of Comares” and its “embutidos” from the area.

If you visit Comares, we recommend you to visit the old fortress, since the views since it is even possible to see the Mediterranean Sea and also visit the old cemetery right next to the fortress. 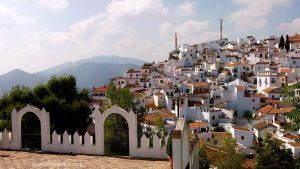 This town is located at the foot of the mountains of “Jobo” and “Camarolos”, and borders with the Malaga Mountains, and surrounded by olive groves. Located at 697 meters above sea level, Villanueva del Rosario becomes the fifth highest village in Malaga.

It is one of the best-known mountain villages to enjoy a quiet and relaxed day, and it also has numerous hiking and climbing routes. The largest route has about 15 kilometres and takes us from the cross of “Camarolos” to “Chamizo”, becoming one of the most difficult routes you can find.

The traditional cuisine of Villanueva del Rosario uses the products of the area, such as olive oil, potatoes and cereals, all of the highest quality. The most important dishes are: “las perdices con arroz” and “conejo al ajillo”. 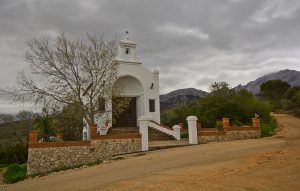 Save the day! and visit one of the highest villages in Malaga during the weekend. Have you thought about discovering the city of Malaga? Would you like to visit Cordoba?

Rate this post about the highest villages in Malaga: